This video about sums up the day! Hehe. 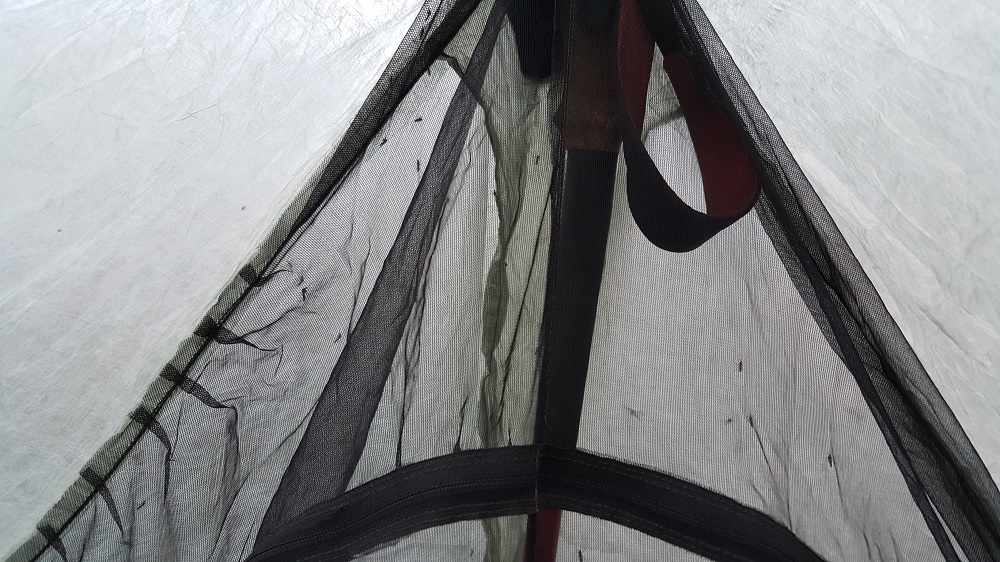 Here’s another video documenting how bad the mosquitoes were.

A very curious sign. When I first read this, I assumed Dynamite was a trail name. Only later did we hear that real dynamite was actually discovered and the rangers were trying to get to the bottom of it. Bizarre. Also of note, this ranger station was famous for having a lot of wild green onions growing nearby, on account of the marshy terrain. It wasn’t clear if they were intended only for the rangers or not, but many hikers were thrilled to pick them, to add later to their instant mashed potatoes. 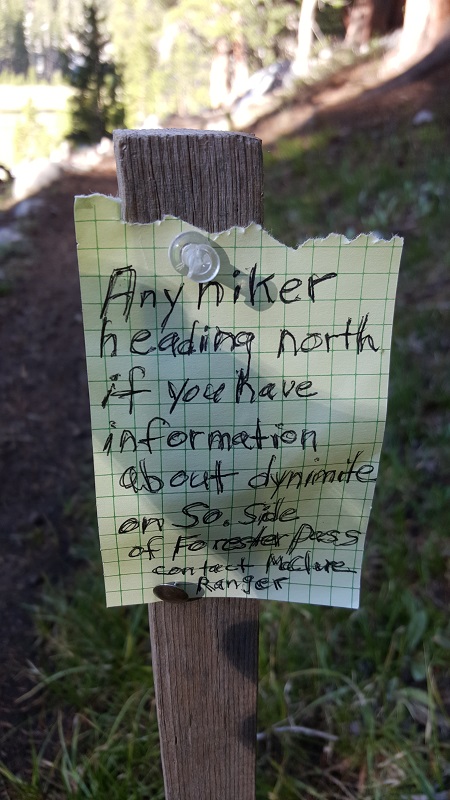 Finally, a big mile day. I had tried to wake Howly up the previous day, and he had told me just to let him sleep in. So today I quietly left early and headed toward Evolution Creek. Some years, this creek is waist-high or higher, and hikers must ford across. Being taller and heavier, I knew I had it easier than most, but I still felt a bit of trepidation in advance, having seen photos from previous years. 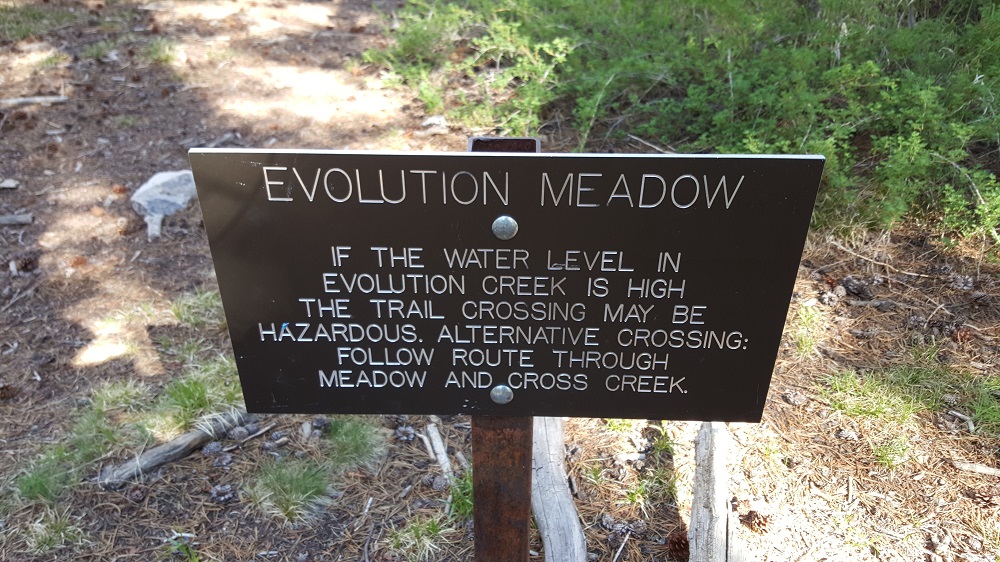 It was nothing. We were lucky with extremely low water. The bigger hassle was my decision to take my socks and shoes off away from the water, fording, and then dressing while the mosquitoes feasted. I just should have kept them on and plunged through, as we would do later on. 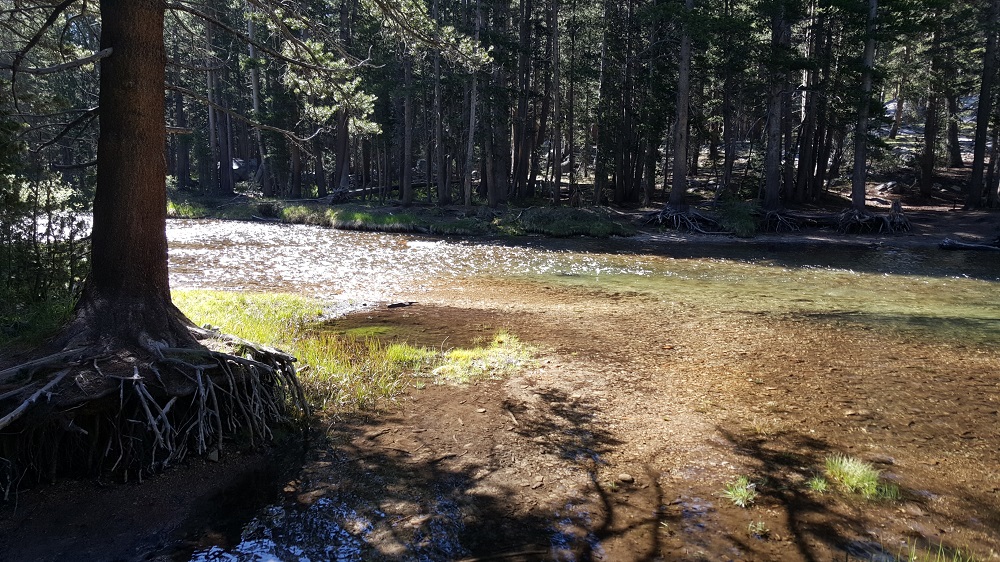 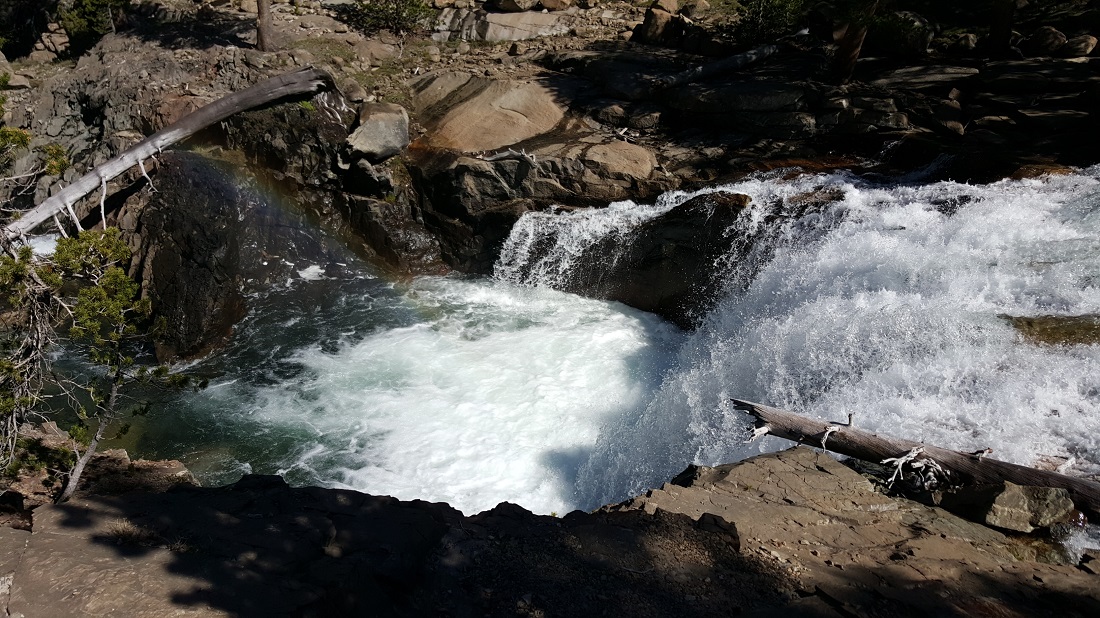 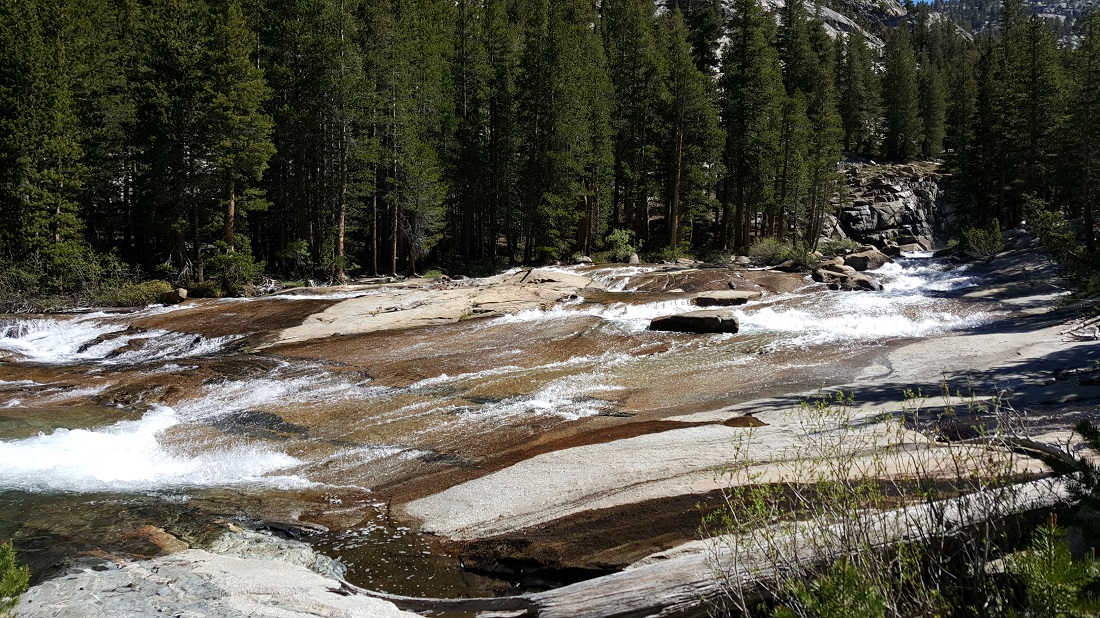 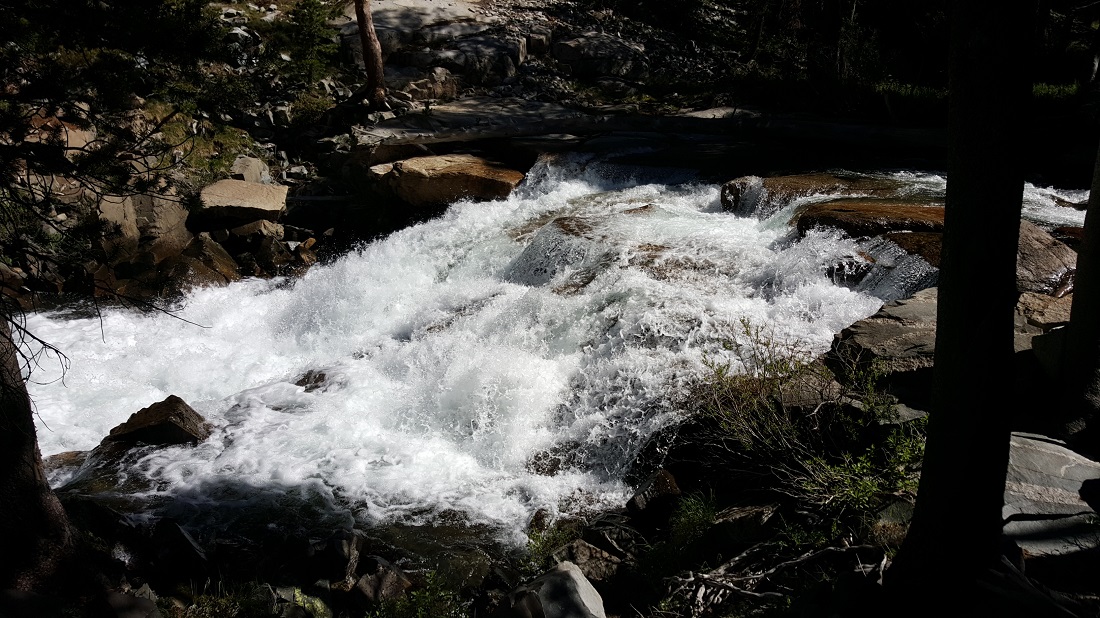 After crossing Evolution, there is a fairly long descent for northbounders, and I made a point of trying to tell the section hikers heading the other way a rough idea of how far away they were from the crossing, and exactly how high the water went. 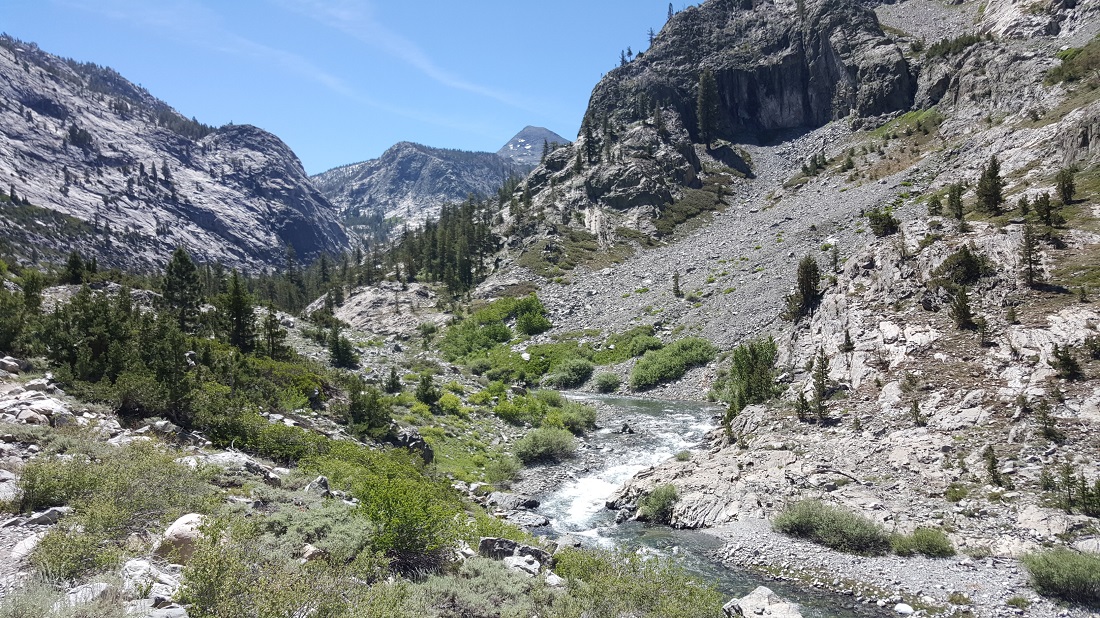 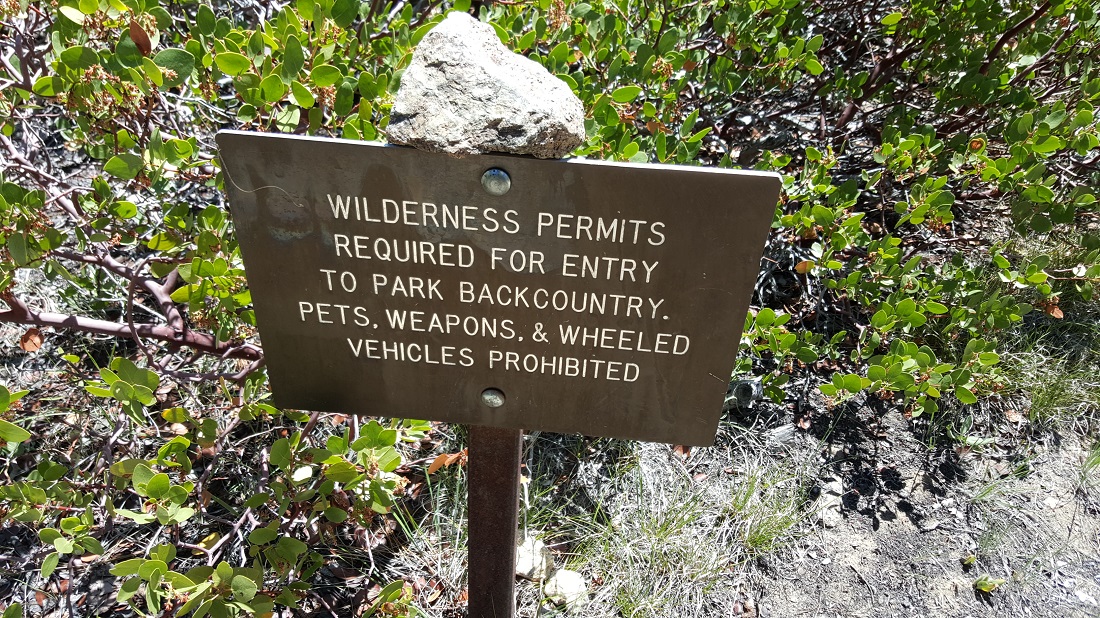 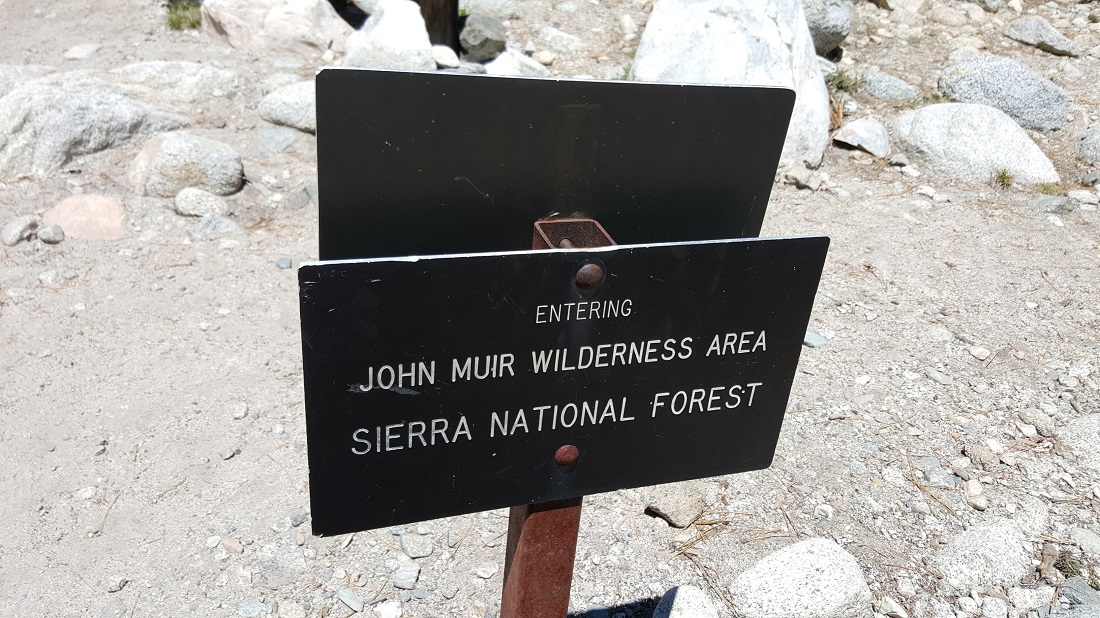 It is rather ironic to be surrounded by water for so much of the day, and yet to have mismanaged my own personal hydration. As the video above shows, I was 3 miles past a water source, thirsty, and checked my app for the next source…only to find that it was another 3 miles away, and up a good portion of the ascent for the day. I would guess it was high nineties, and I was in a bad way and actually asked a section hiker if he happened to have any extra water. He happily offered his 16 oz. bottle, but I declined when I realized that was all he had. New Husk. I did the next mile of the ascent at a snail’s pace and reached the most minute spring…water just trickling down a rocky plain. I used a ziplock bag to collect it, and collect I did. I probably “wasted” 45 minutes at this spring, slowly collecting and filtering until I’d had my fill and more. 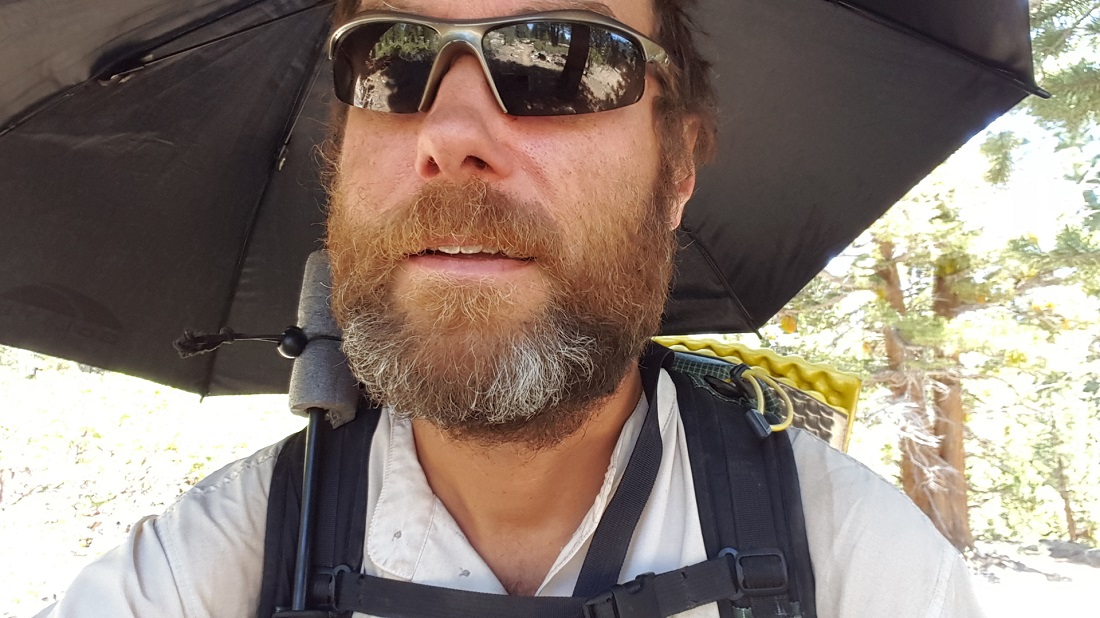 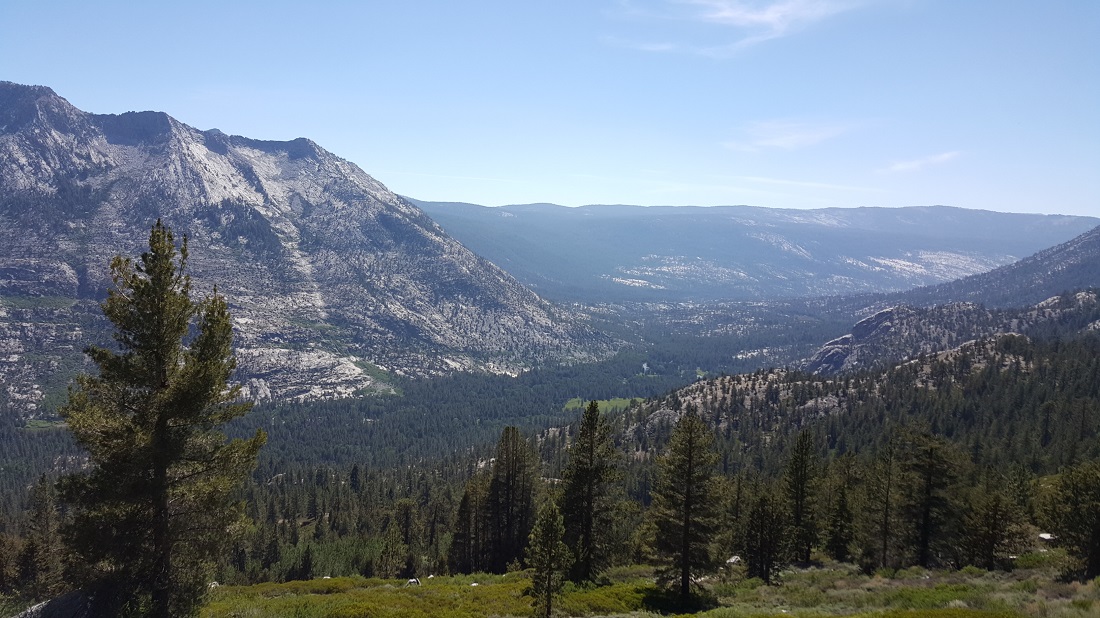 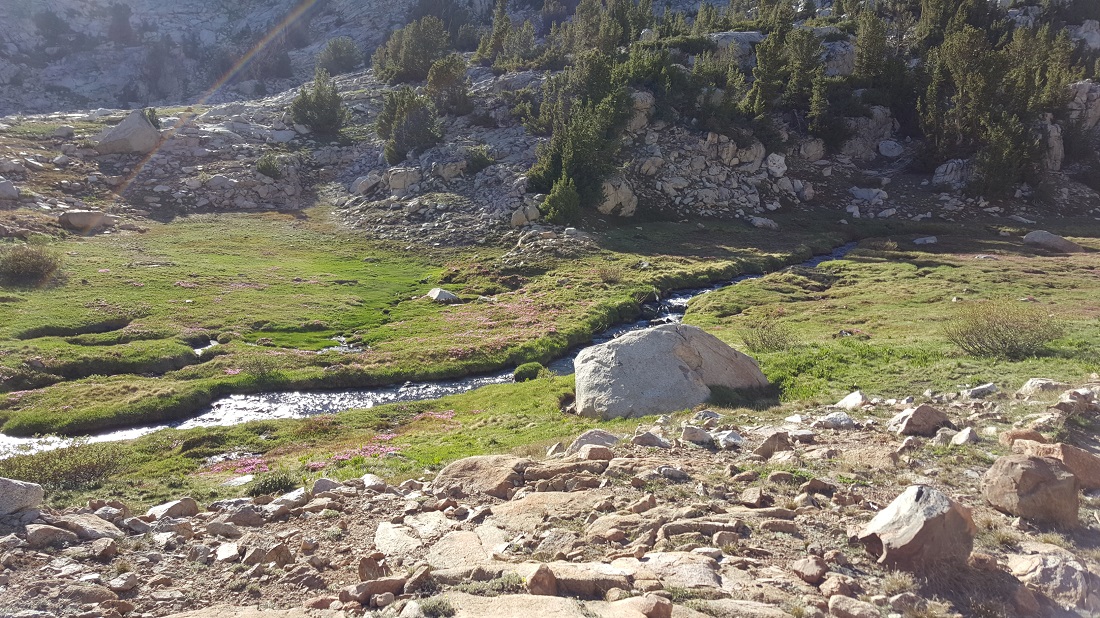 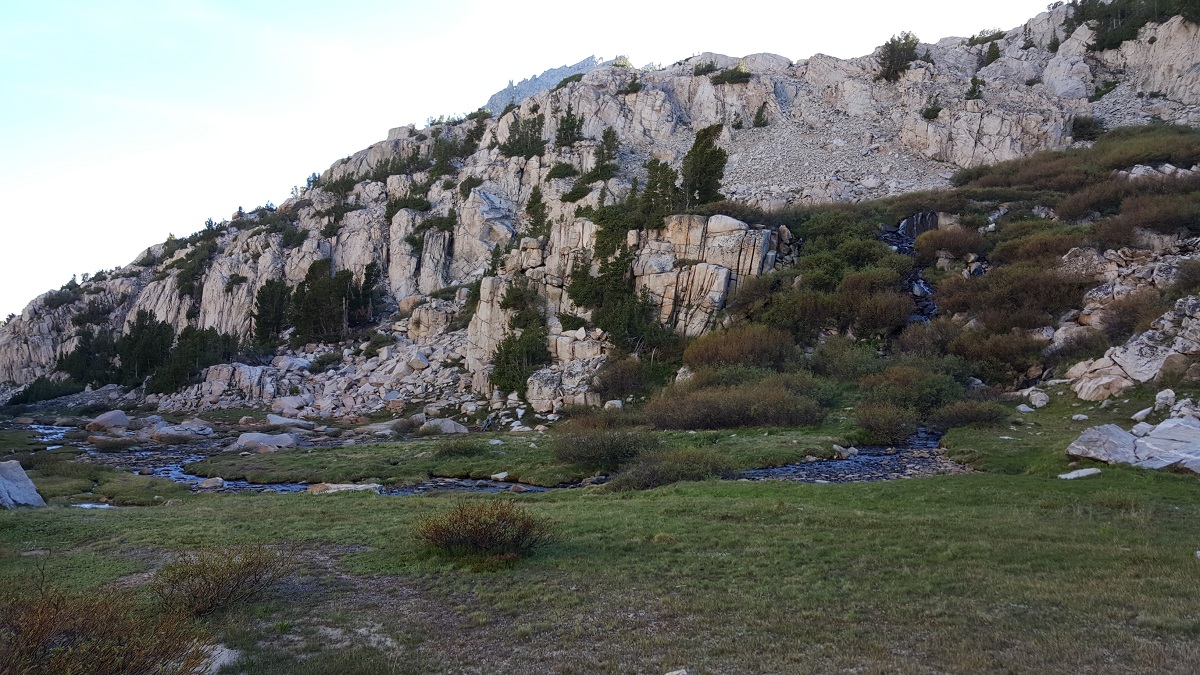 Looking north from Selden Pass, where the mosquitoes are sharpening their knives. 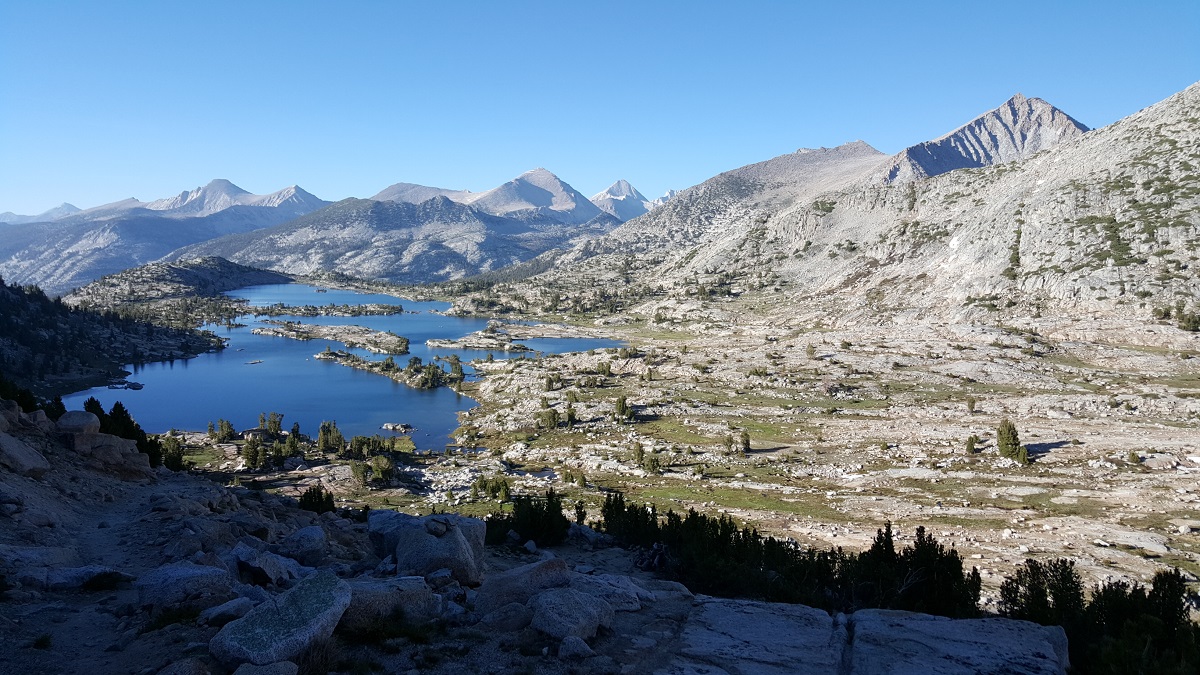 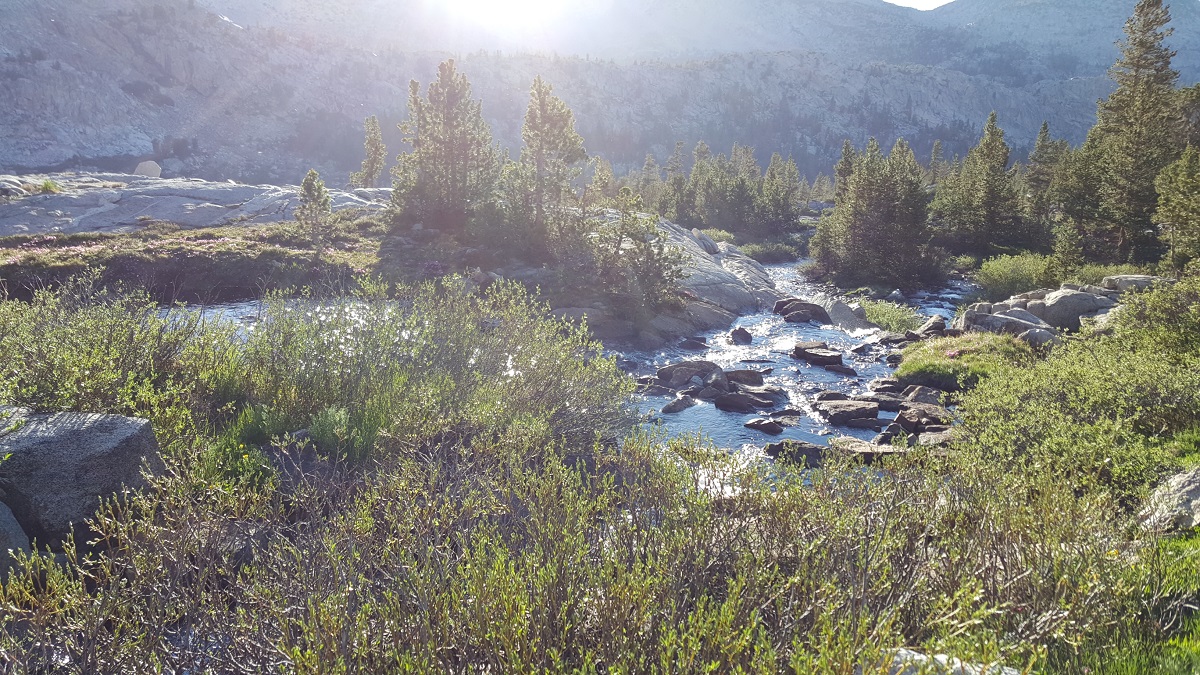 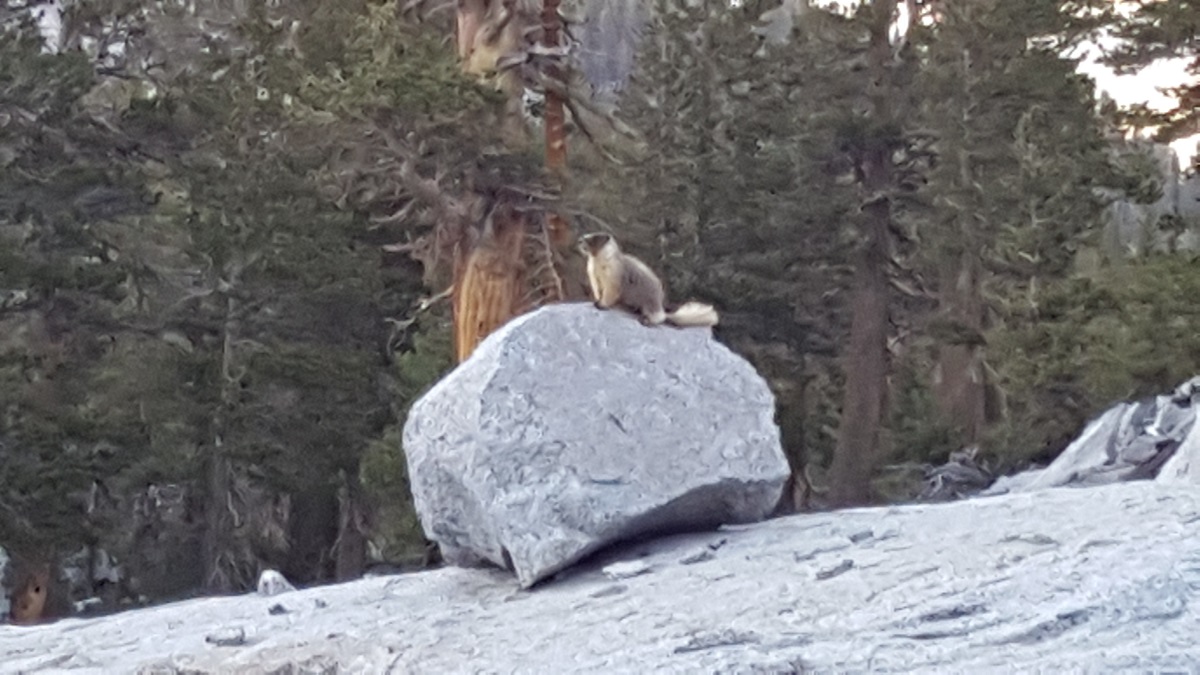 It is strange to hike in such a vast expanse and see so few people. One or two section hikers heading south occasionally. Near late afternoon, approaching the summit of the pass, the trail wends along the water’s edge of several lakes. There were so many beautiful potential camping spots. I saw these locations and thought there was a good chance that Howly would stop for the night here. He is always going on about lakes and fish. I briefly considered pitching, but moved on.

The summit itself was easy. Easier than the previous 5 passes. However, it was remarkable how soon after descending the north side of the pass that the mosquitoes descended en masse. It was a thing to behold. I pushed past the lakes and hiked to the edge of light, sometimes at a slight jog to keep them at bay. I pushed to where my Guthook app said there was a campsite and hastily tried to pitch with my head net on. My only exposed skin was my hands and they knew it. Already exhausted from the day, I struggled to pitch my tent. It seemed every stake was striking rock only an inch beneath the soil. After finally getting in my tent, I spent a good amount of minutes shaking the corners and killing 30 mosquitoes.

Only after I had settled did I realize I was still .1 mile away from the campsite that Guthook had recommended, grrrr. But I had a great laugh when an hour later, in pitch black, I hear a hiker coming along the trail with his headlamp on.

“No…friggin…way….” The Howlitzer had finally caught the Husk. He thought for sure he must have passed me miles ago. Like myself, he had continued walking only in an attempt to outlast the mosquitoes. (We later heard that RebelBiscuit had hiked 34 miles this day–all the way to VVR, because the mosquitoes were so bad.) I told Howly I’d missed the actual campsite and if he just moved ahead another 100 meters, he’d likely find it. But I won’t lie…I lay in the dark with a grin on my face for the next 10 minutes, feeling smug in my fortress. I’d beaten both his expectations and the bugs.